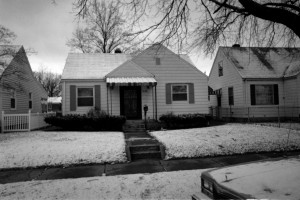 So what do you see when you look at this house?

The picture above is the house I spent most of my childhood or at least until I turned nine and we moved out to rural Granger. I took this picture in 2004 as the beginning of a work in progress that I am still working on.

The house is very different then I remember. It seems smaller and less wrathful. There were two trees in the front yard one on either side of the sidewalk; a white screen door and the shutters were black (they are green now). I wish I could go inside and see how things have changed. I remember there was pink tile in the bathroom and I remember always being afraid to go into that room. The strange double cabinet in the hallway that had a lock on it. I remember that my folk’s bedroom was purple.

I have stared at this photo for hours thinking and trying to connect all the dots. How did I get from there to here? Reliving each of the steps has been difficult and weird at best. Perception is altered between the eyes of a child and the eyes of an adult.

I think that is why I am feeling such a sense of disconnect. I couldn’t be the child that grew up in that house. The child that grew up in that house was scared and afraid of everything.  When I look at the photo everything looks so small and banal. But as a child it was huge and consuming to me and embodied memories of fear and unhappiness.  As children we only know of what surrounds us and that by default becomes how we gauge everything else in our world, until we learn different… if we ever learn.

I have observed that people follow a natural way that things “should” happen, high school, college, marriage, career, children… you get the idea. I never felt the need to follow those rules. I think the fact that I am “queer” might have something to do with it because the rules of “straight society” never seemed to include me. So, I had to make up my own goals and a new method to measure them.  I have also observed that most of life’s accomplishment one leads into the other.  Mine did not,  I  would finished one goal and then started working on another… and more times then not there was no logical connection to other than it was what I wanted to do at the time.

I must admit, I think this gave me a much more fuller life experience by following my own rules. It was not an easy path. There are many things that I learned on this path that I would have much rather read in a book.

But that is for another blog at another time.