A new year and a new series of Calligraphy Classes have started at the Discovery Center. Sunday marked the first day of class and there was a wonderful turnout with a total of 10 students.  In this session I am teaching the graceful Chancery Cursive Script (Cancellaresca Corsiva).

This script was the standard hand in Italy around the 15th century. The main individuals responsible for this beautiful script were Ludovico degli Arrighi, Giouanniantonio Tagliente and Giovanbattista Palatino.

The basic letterform is a development of an earlier style-

Niccolo Niccoli who in the early 15th century established in Florence a school of writing based on the Carlovingian minuscule. Because of the clarity and beauty of this form it prospered. Eventually (during the pontification of Eugeninus IV – (1431-1447) his hand was adopted as the official form for all papal briefs – hence its name “Chancery”.

In the first class we were able to get use to using the broad edge marker and crawled our way through all of the minuscles (lower case letters) and the students created their names as their first word utilizing their newly learned script. It’s a lot information to absorb in two hours but that will give them plenty to practice till we meet again next Sunday afternoon. Then we will be covering the formation of the Majuscules letters and the numbers… and then we can create sentences! 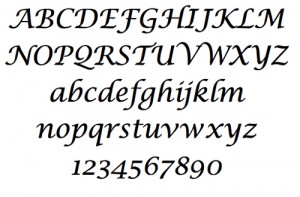