Phoenix premiered at the 2010 Humana Festival of New American Plays and is the inaugural production for Nomades: A Nomadic Theatre.

PAY WHAT YOU CAN

When Bruce and Sue meet four weeks after an uncharacteristic one-night-stand, Sue has this to say to him: one, I had a great time with you that night and two, let’s never see each other again. Thus begins a 4,000 mile journey well beyond the confines of their carefully structured worlds. Bruce is fueled by an overwhelming but undefined compulsion to join her in Phoenix. Sue is reluctantly charmed by his persistence, but steadfast in her resolve to keep him at bay. Both are forced to consider a whole new world of possibility, though not one free of difficulty and loss. 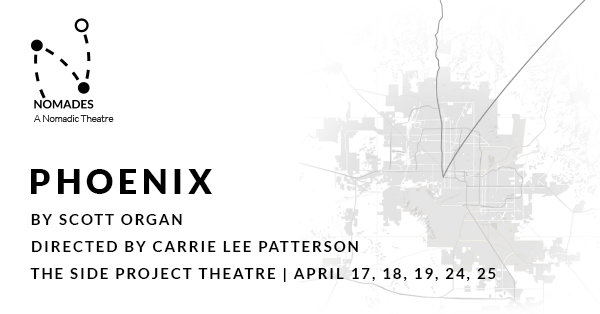